Christensen’s disruptive innovation theories have been around for about a decade now and we continue to see it played out in institution after institution that insists on business as usual methods of doing business. It is sad when an established firm goes out of business and everyone outside the organization can see it coming, but those within insist that everything that they are doing is just fine. It has worked for years. Why fix something that isn’t broken.

What is amazing about this is that some of those who can see their neighbor’s business headed for a crash fail to see that their own organization is doing exactly the same thing.

Traditionally, businesses have not valued higher order thinking skills (HOTS). However, with technology becoming ever more sophisticated and the problems to be solved become more obvious, hundreds of millions of jobs are going to be automated. According to the World Economic Forum, 800,000,000 jobs will be automated in the next 20 years.

Anything that involves repetitive actions or thinking can be automated. From welding corners to diagnosing illnesses, things that are repetitive and can be done by an algorithm will end up being done by an algorithm. The refrain of, “I’ll never get into a self-driven vehicle!” will go the same place that the, “I’ll never get into one of those motorcars!” refrain went 100 years ago. I can hear it now, “I’ll never trust my health to some computer program”, or “I’ll never trust a computer to give me sound legal advice”. For the everyday, run of the mill, advice given out by a lawyer, health care professional, or pretty well every other repetitive profession, an algorithm will be fine. For repetitive manual tasks, much of the automation is already there.

Whatever happened (or is happening) to bank tellers, cashiers, travel advisors, or newspaper deliveries? Did any of them see their jobs disappearing? Better yet, did any of the executives of the firms they worked for see their work disappearing? How difficult is it to automate big banking decisions. If you ask the hot players in the field, they will never be automated – we’ll see. You don’t have to pay bonuses to algorithms.

The “NOT ME” crowd is going to get smaller and smaller. As Tom Hulme (general partner in the venture capital arm of Google’s parent firm Alphabet) wrote last week, “Deep machine learning will likely automate the writing of code relatively quickly. Creativity is going to be far more important in a future where software can code better than we can”. So much for the billions that have been (and is) being poured into training programmers.

Maybe it is time for the dogmatic orthodox managers to begin to develop some insight that can be used to really have a look at what and how they do things. A friend was telling me about a recent conversation he had with a senior executive at a multinational company where they had a conversation about HOTS. The executive said that, as a firm, they had no interest in employees with HOTS, as their business was doing fine. I wonder how fine they will be doing when a new, upstart competitor who values HOTS uses employees with higher order creativity to come up with ways of doing things or automating things that will reduce costs and increase efficiency and obliterate any competition. We’ve seen it over and over. How blind can our captains of industry be?

And who are these multinational monopolies? For the most part, we don’t know yet, at least not in every field. We know a few, but not the ones who haven’t erupted yet. But, we know how they will get there. These companies will be the ones who recognize and nurture HOTS in their employees. Does anyone really think that APPLE got where it is today without nurturing higher order creativity? Critical thinking? Complex problem solving through induction and deduction? Higher order insight (metacognition) to recognize genius, stupidity, and real creativity? If they no longer value HOTS (as some have been heard to say), how long will they remain on top?

The World Economic Forum has listed the top 10 skills necessary for success in the coming decades. Six of the top 10 are HOTS. It has been suggested that the failure of many commercial enterprises can be traced to the lack of value the institution places on HOTS. 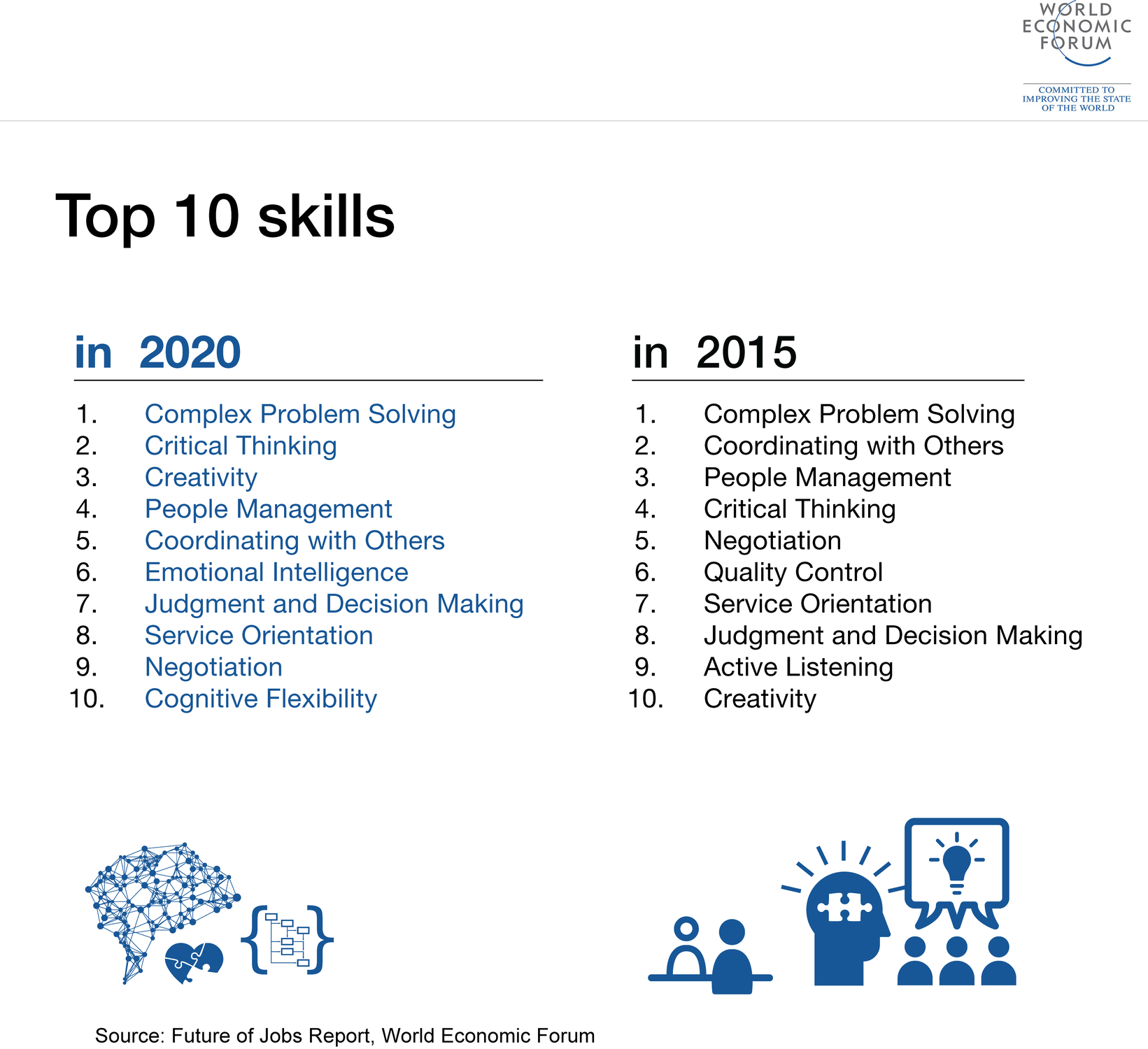 Business leaders who dismiss HOTS in their key (or all) employees do so at their peril. Who wants to captain a sinking flagship? The problem with a sinking flagship is that the sinking isn’t recognized until there is water flowing down the corridors. By then, it is too late.

Large established dominant player or small nimble upstart – tomorrow’s multinational monopoly will be the firm that values and nurtures HOTS as a way to grow. We will recognize them by the value they place on the critical thinking, higher order creativity, and cognitive flexibility of their key people.

Here are the principle HOTS and what they can do for your organization:

The ability to take related or even seemingly unrelated concepts or events and develop an overarching theoretical understanding of what draws the concepts together.

Many of the problems in the business world and society revolve around the ability to bring together concepts and events that appear to be unrelated into a single, understandable, overarching construct or idea. This inability is one of the impediments to, not only carrying out complex inductive reasoning but understanding how conclusions are reached using this type of reasoning. People with this thinking skill would bring both greater understanding and the ability to synthesize ideas and concepts to an organization.

Much more difficult than complex inductive reasoning. This is the ability to take an overarching theory or concept and extract or deduce the concepts, constructs, or instances that will arise from of the theory.

Knowing a general organizational, scientific, or societal principle is very different from being able to understand the impact of that principle in specific circumstances. As an example, newly imposed regulations or in-house guidelines almost always have unintended consequences for organizations. Being able to reason out what these consequences are before they take effect allows an organization to prepare for the impact. Imagine your increased competitiveness when you have key employees who can watch the horizon and come up with strategies that will allow you to take advantage of the upheaval? Having a number of key people able to use this type of reasoning greatly strengthens an organization.

This is the ability to understand the application of logic and general reason to problems and situations and evaluate solutions and outcomes based on the evidence available.

Rational thinking and applying the basic rules of logic allow us to communicate with one another. Higher order rational thinking and logic allows us to take our interactions to a different level. Removing ambiguity, insisting on the highest standards of clarity in communication, and demanding robust evidence for decision making have more of an impact in moving organizations toward institutional goals than almost any other factor. Having the majority of your administrative or management team (or even your rank and file workers) able to use these skills in their thinking and communication has the potential to revolutionize your operations.

Creativity that goes beyond the design of a new mobile phone cover.

This is the type of creativity that is seen in the ability to take a static electric shock and develop a light bulb. This requires in-depth expertise from different fields working together as a team in order to be able to make novel connections that result in new ideas or products. Current educational practices are based on models of conformity and obedience to authority that not only discourages real creativity but usually penalizes it. Coming up with the right answer fosters convergent thinking – not great for creativity. Building a unit of people devoted to really creating something new and different in the way of ideas or products will provide an organization with both a competitive edge and a greater ability to reach its potential.

The self-awareness that, among other things, allows individuals to understand their own limitations and the limitations of those around them and identify how these shortcomings can be alleviated.

We know how to make this happen. Are you going to be one of the giant dinosaurs of yesterday or the dominant multinational monopoly of tomorrow?

The value you place on your employees HOTS is going to define your future.