The sad thing is that there is no end in sight. Millions are spent every year convincing children and their parents that this is the only way to go. Is this just the way things are?

Thirty-five percent of the 25 – 29 year olds live in the basement. That’s 35%. This is the highest seen since 1939. Just at the end of the great depression and the beginning of WWII. More than one in three are in the basement. 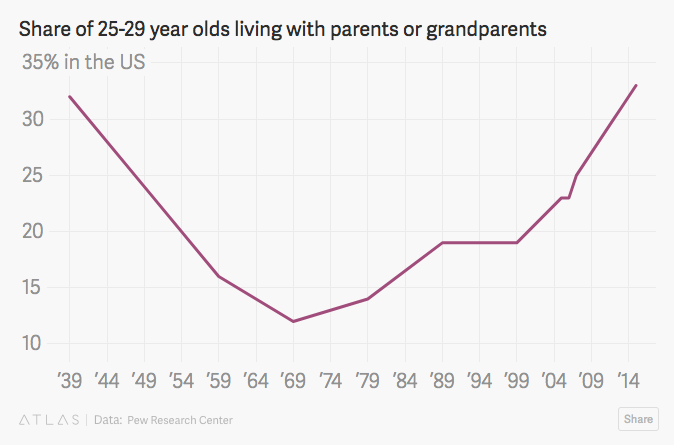 I doubt that any of these young adults lay in bed as eight-year-olds dreaming about living in mom and dad’s basement. Memorizing their way through high school so that they could get into a good college, I doubt that anyone’s goal was moving back home. While they were trying to stay awake as they were PowerPointed to death after a week of the student experience, I can’t believe that their hopes were pinned on the poster above their bed at home.

And the Generation Zs (10 – 24-year-olds) don’t look like they are not going to fare any better – but at least they have their video games.

It is a good thing that it is all their fault and we can’t be blamed for their lot.

With the hard swing to the Right, I have been shocked to watch the rapid resurgence of social Darwinism. You know, the Ayn Rand kind of a world where if you can’t cut it then die kind of place. The survival of the fittest world that we are beginning to see around us. All because, even though we are the richest we have ever been in the history of the world, there isn’t any money.

As I was reading an article last week about students being unable to pay for food to eat, I was disgusted that the majority of the comments blamed the students saying that this is their own faults. A large number of comments disdainfully said that these lazy students should get out and work part-time so that they can eat.

As dire as it looks for young adults today, what is on the horizon that is going to make things better? The 10-year-old Generation Zers are screwed.

And you thought the job market was tough today.

Why is higher education still focussing on the student experience as the answer? I guess that the reason is that it is the answer for the institutions. As long as the institutions can look good to the students (4 year PARTY), they will mortgage their futures for an empty qualification in order to support the endless trivial pursuit game played in the basement of the institutions – research.

Maybe we should be doing something about this… or is it too late?